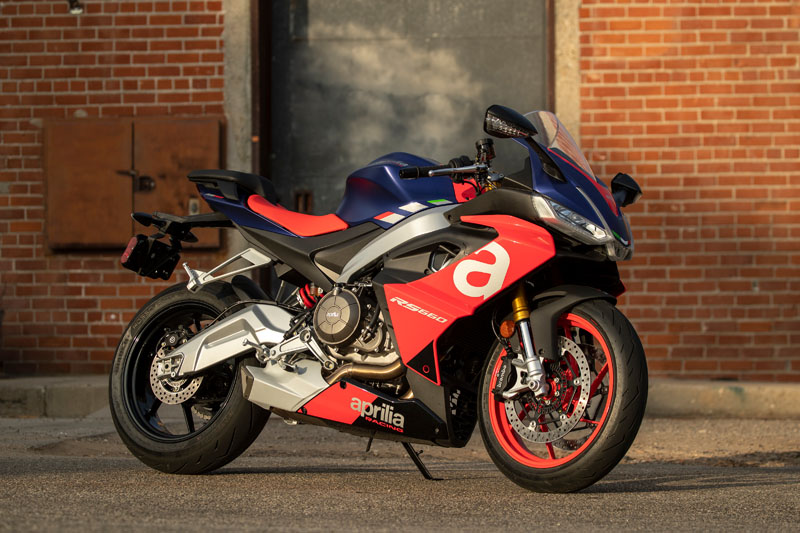 The Aprilia RS 660 has been a hot topic since a concept of it was displayed at EICMA 2018. That’s logical since the RS 660 has a vital role to play for the Italian manufacturer.  It’s their first fully fairing middleweight, so it’s a street bike with racetrack capability. In a broader sense, the RS 660 brings a level of sophistication and technology unparalleled in the class.

On the road, those characteristics don’t translate positively unless you live near an uncrowded mountain road. In traffic, the committed riding position means the wrists get heavy, compounded only by the bad suspension and lackluster engine. instead, Aprilia took a niche in the still-thriving middleweight class, rubbing elbows with Suzuki, Kawasaki, Ninja, Yamaha, and Honda, although with a raised pinky, thanks to its $11,299 price tag.  While all of them are fine machines in their own right, they can’t match what the Aprilia RS 660 offers in performance, the power to weight ratio, equipment, and electronics.

Featured In the December 2020 issue of Roadracing World:

“I’ve spent the last decade and a half racing Suzuki SV650s. I built an SV500 that I took to two class lap records at Willow Springs. The last SV650 I turned into a racebike (with an engine built by Twin Works) was quick enough to take class wins in CVMA, albeit in the hands of a younger, hungrier racer than I am nowadays.

“For decades, the SV has been right at the top of the 650 Twins class in terms of ultimate race potential, and it’s a friendly, fun street ride with a base model selling for $7,099 off the showroom floor. Now Aprilia has built the RS660, and suddenly every other 650-class Twin is obsolete.

“The 2021 RS660 makes more horsepower in Euro5 emissions-compliant specification than any SV racebike I’ve ever built, and Racing Editor Chris Ulrich’s butt dynamometer suggests that it is right there with the most powerful bikes on the MotoAmerica Twins Cup grid. It’s 34 pounds lighter than a naked SV650, even with the added weight of a full fairing. It has inverted forks, an electronics suite developed for the company’s Supersport RSV4, a twin-spar chassis, and the list goes on…”