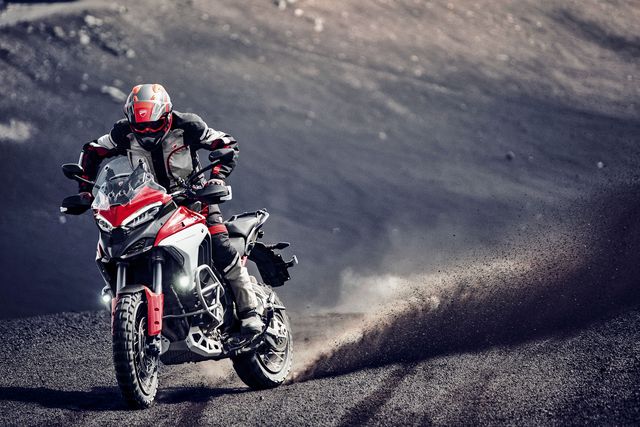 Ducati may be best known for its pavement-oriented motorcycles, but the brand also has been known to throw its weight around in the world of all-road motorcycles as well. With the new Multistrada V4, the Italian bike manufacturer is making it clear that, even as competitors like Harley-Davidson attempt to attack its piece of the adventure bike space, Ducati fully intends to keep itself a player in ADV World.

Indeed, the new Multistrada V4 sounds like a pretty damn delightful way to ride along with any type of road you’re likely to stumble upon. At its heart lies a new engine, called the V4 Granturismo — a 1,158cc motor that cranks out 170 horses at 10,500 rpm and 92 lb-ft of torque at 8,750, fed by a 5.8-gallon gas tank. Perhaps more importantly for anyone hoping to pull a McGregor & Boorman, the new motor can go a mighty 9,300 miles between oil changes, and only needs adjustment every 37,000 miles.

The aluminum monocoque frame boasts a 19-inch front wheel and double-sided swingarm that can handle spoked wheels if so desired. As you’d expect of an ADV ready to tackle rough terrain, there’s plenty of ground clearance (8.7 inches) and suspension travel (6.7 inches up front, 7.1 inches in the rear); but considering it’s also a bike designed for long road trips, the easily-adjustable windscreen and other aerodynamic optimizations mean you won’t have to deal with too much wind buffeting.

As vehicles like the new Land Rover Defender have shown, option packages with exciting branding are all the rage these days in the motoring world. The new Multistrada V4 offers five: Essential, Travel, Radar, Performance, and Full, the latter of which, presumably, just throws the kitchen sink at the bike. Those are available on the mid-range V4 S, which starts at $24,895 in the U.S.; if you opt for the Multistrada V4 S Sport, you’ll get the Performance pack as part of the bargain, along with a rorty Akrapovič exhaust, carbon front fender, and wilder livery. There’s also a basic V4 that starts at $19,995, for those who simply want the least expensive way to hit the road.