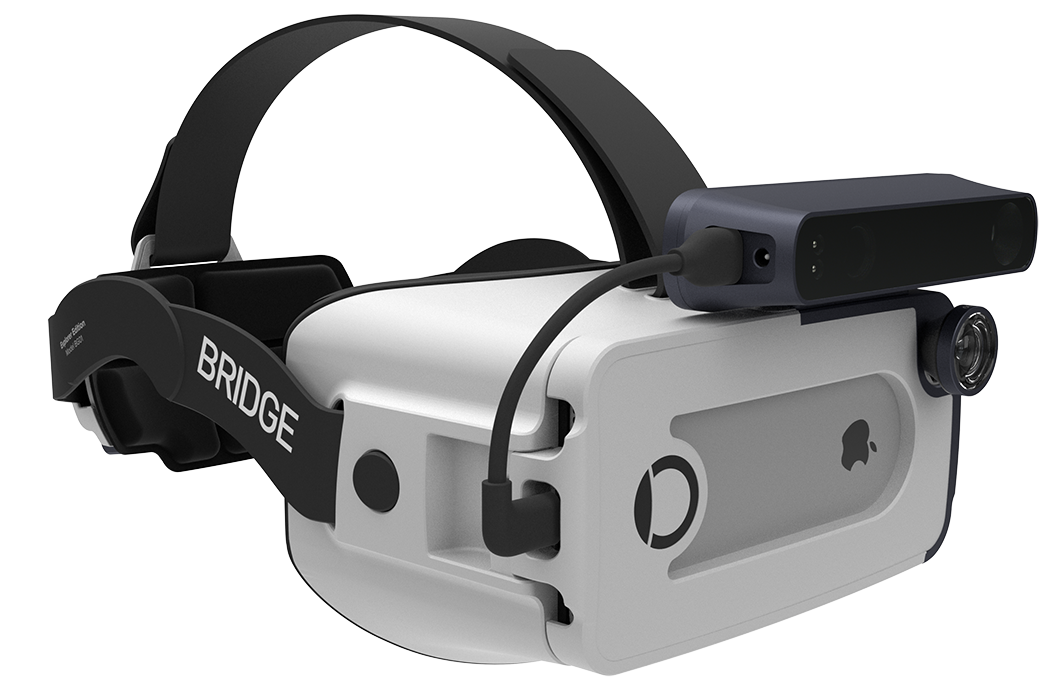 This news piece may turn out to be very exciting for iPhone owners. Occipital, the company behind Structure Sensor is trying to bring mixed VR into your iPhones in as early as Mar 2017 with the launch of its AR/VR Bridge headset.

[ad code=1 align=center]
The Bridge headset is technically a Position Tracking Mixed Reality headset that aims to offer immersive virtual reality experiences. The developers say that it is quite literally a “bridge” between fantasy and reality. It allows us to seamlessly watch virtual characters come alive in our “real” environment and start interacting in a seemingly realistic way. 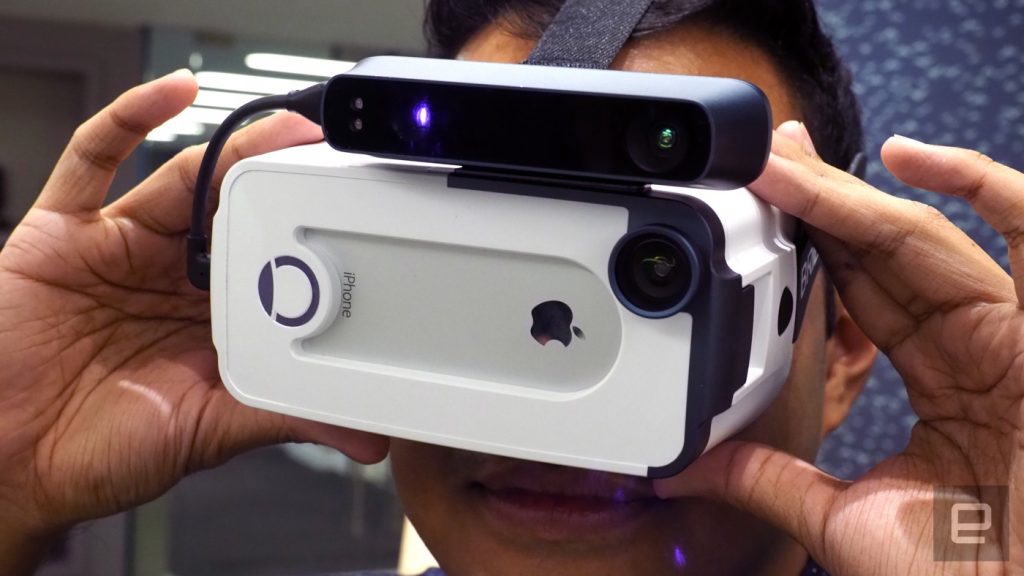 The Bridge headset is fully optimized and built from the ground-up especially for the iPhone 6, 6s & 7; so we can expect it to run flawlessly and even deliver powerful performance that exceed the range of Android headsets. It works with the help of the 3D Structure sensor which is built into it which allows for advanced image mapping never seen before in mobile devices. This also enables the Bridge to map the surroundings which you’re in with greater detail thanks to the 120-degree wide-angle lens add-on.
Also what’s interesting in the Bridge headset is the “Positional Tracking” feature. What it does is sense and track the movement of objects by creating a depth map of the object. It can track any object as close as a foot and a half away and no further than 11 feet, which is pretty remarkable. 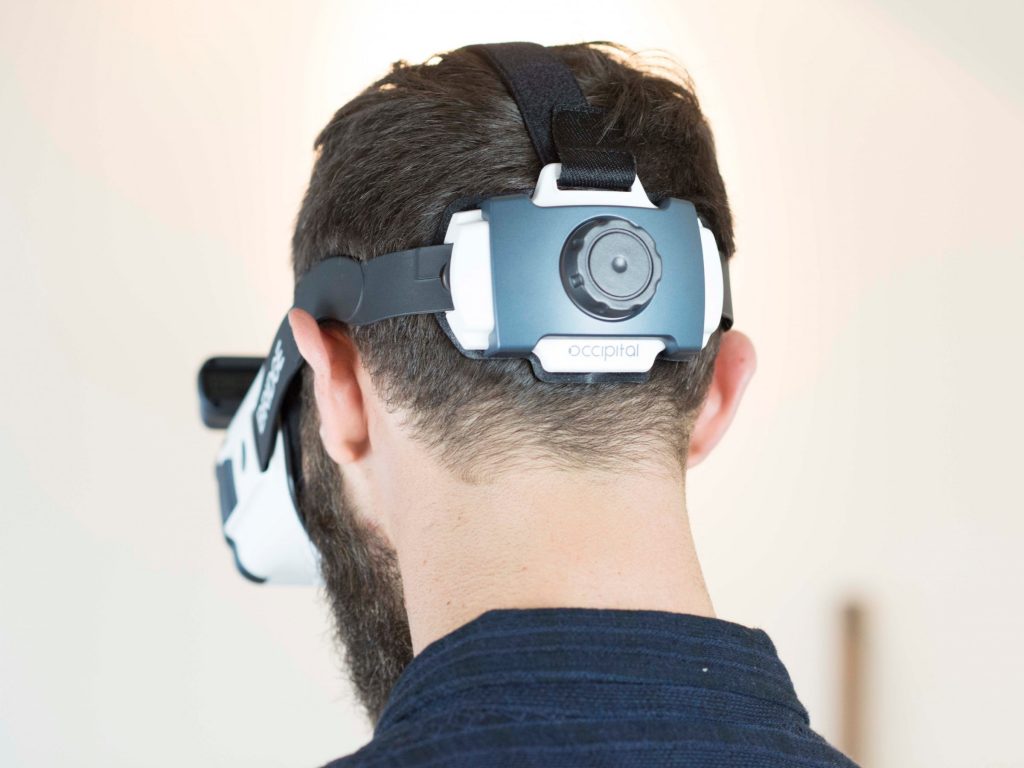 This kind of Positional tracking is usually found in the top-end category of VR headsets such as HTC Vive, Playstation VR and Oculus Rift; hence it’s refreshing to see it in the realm of mobile VR category. Although it is meant to be quite a power-hungry feature, to balance this out, Occipital have introduced a separate rechargeable battery just for the 3D Structure sensor which can easily last 3-4 hours on a single charge. 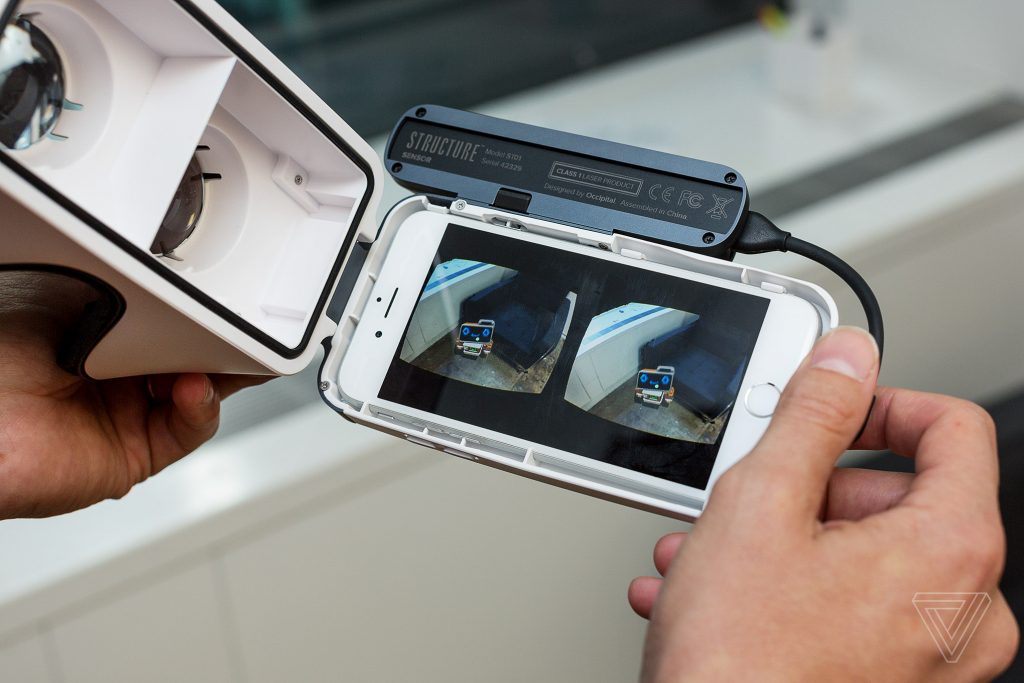 The headset is quite easy to operate. All you need to do is pop in your supported iPhone into the device and close the door. Wear the headset and tighten it with the help of a knob in the back and voila, you’re good to go! As you move around your room, the sensor picks up the data and will map the virtual surroundings in under a minute. You also get to play fetch with a built-in virtual pet robot called Bridget.
The Bridge headset is touted to work with all existing iOS VR apps and VR videos. Then there is the availability of Unity plugin for developers to craft stunning VR experiences making use of the Bridge Engine SDK. The Bridge headset runs at 60 Hz albeit with a low resolution of 640X480. While this may not be a deal-breaker for some, the real limitation is that the headset doesn’t support any Plus iPhone models.
The consumer edition of Bridge starts shipping on Mar 2017 and you can pre-order right now at $399. On the other hand the Bridge Explorer Edition, which is meant for developers, is ready to ship on Dec 16, and you can buy one for $499. We advise you to hurry as there are a limited number of units currently available.